With Peter's strong ‘Very’ Special Effects credential, it was inevitable that they would eventually get to know and work with The Moving Picture Company, led by Mike Luckwell and Derek Banham. Derek was the creative partner, and he asked Peter to join him on a Scalextric shoot, using their overhead tracking close up Snorkel system to travel behind, in front of, beside the rapidly moving vehicles.

No problem, or so they though! How wrong they were. The vehicles progressed so jerkily that their two-ton system just could not accelerate and decelerate that fast.

They decided to ‘drive’ the vehicles with the two-ton camera system. They devised a nylon chord attachment beneath the racing cars that was hidden in the slot between the wheels of the cars, then laid within the same slot all the way to the extreme ends of the forty-foot track, around pulley blocks secured there, and back up as a continuous loop in excess of eighty foot long, to the bottom of the snorkel lens, thereby where and when the camera progressed, so too did the vehicles.

The elasticity within those nylon chords, then allowed us easily to vary the speeds, by applying hand resistance to one of the chords to one of the neck-and-neck competing vehicles.

The system worked a treat! 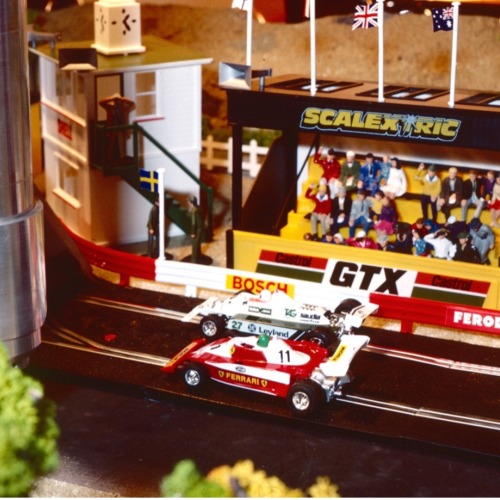