Close on the heels of their Supergirl shoot, Peter was asked by an old friend and very talented Production Designer embarking on his first ever production as designer, Stuart Craig, of Harry Potter Design fame, whether, for a Kirk Douglas starring film, they could simulate the asteroid/meteorite rings of Saturn, viewed from the cockpit of a spacecraft flying through them!

Because of the successful use of total internal reflection to produce infinity space-scapes on Supergirl, Peter said ‘Yes’.

Once again, they built a sixty foot long, glass sided and bottomed tank and filled it with their magic crystal-clear fluids and tipped in a load of pumice, which settled at all different levels within the fluids.

By then using their overhead snorkel crane system, they flew through the ‘set’ but viewed it from within the tunnel of total internally reflected ‘meteorites’ that appeared to stretch for ever, both left and right, as well as above and below.

They also originated point of view shots of a model spacecraft that tracked with the camera rig, in reverse, so the final material made it look as if all the meteorites were gently revolving as they were approached, stirred up by the craft itself, but reversed.

The result was magical, and the director, Stanley Donen, who, by then, had replaced the original director, phoned with congratulations, a rare event indeed. 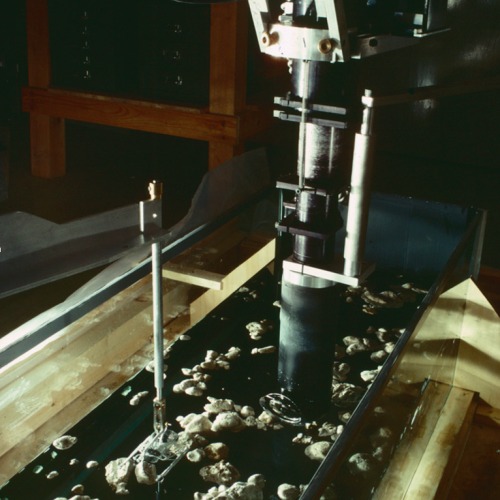